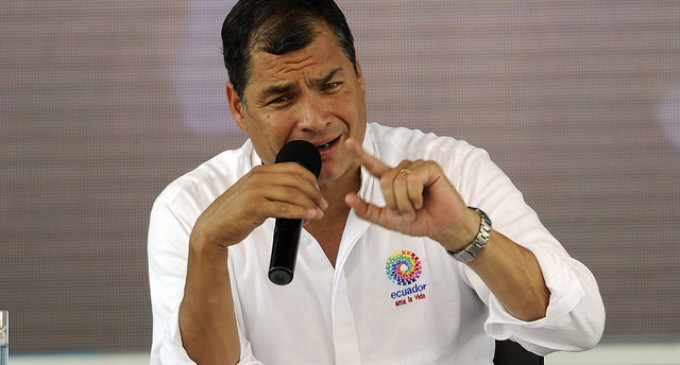 By N. H. Gill
(February 26, 2020) – Ecuadorian ex-President Rafael Correa is on trial again, this time for campaign-finance fraud. Three years after a national referendum forced him from office, Correa is being tried in absentia for his alleged role in a scheme to extort government contractors for campaign contributions during his decade in power.

Given the number of former Ecuadorian presidents currently living in exile, it’s unlikely he’ll be extradited from Belgium. But if he did return, it would more likely be as an asambleista with limited parliamentary immunity. While Correa hasn’t announced any candidacy, he is promoting a new political ticket, Lista 5, whose platform seems to be “recuperar la Patria y castigar a los traidores.” That’s a fair description of what he’d need to do to avoid risking prison if he decided to return at this point. Ironically, there would still be a precedent for removing a sitting legislator, even with parliamentary immunity. Correa did it to Galo Lara in 2013.

As the corruption investigation widens, Correa’s allies are increasingly turning on each other. This has all but paralyzed the current administration, who has seen once fertile ties to the former president turn toxic as the extent of his mismanagement becomes public. President Lenín Moreno, who was Correa’s hand-picked successor and served as his vice president from 2007 to 2012, has tried to publically distance himself from his former boss. But he has already lost two of his own vice presidents to corruption scandals linked to Correa. The administration’s handling of the October protests cost it even more valuable political capital, and a ballooning debt crisis has haunted public finances since the day Moreno took office. With no help on the horizon and his approval rating in the teens, it seems the president now plans to run out the clock until his term ends next year.

Many factors contributed to Ecuador’s current crisis, but the splintering of the political left is one of the most important. Ecuador’s left has been historically dominated by liberal reformers, organized labor, and indigenous groups. Although frequent allies, the groups have long differed over fundamental questions of vision, with liberals seeking reforms within a capitalistic system, socialists pursuing ideals of a working-class revolution, indigenous groups seeking ethnic revival, and mixtures of all the above. In postcolonial societies like Ecuador’s, taking these different visions seriously has profound implications for everyone.

During most of the twentieth century, indigenous groups more often organized with labor as campesinos, emphasizing their economic role as peasants and workers over their ethnic identity as Andeans. The agrarian reforms of the 1960s and early 1970s were a high-water mark for this movement. However, the focus on class struggle did not solve the problem of entrenched racism.

Reflecting this discontent, Ecuadorian indigenous groups formed the Confederación de Nacionalidades Indígenas del Ecuador (CONAIE) in 1986 to advocate for more specifically-indigenous issues, including bilingual education, community land rights, and the recognition of a plurinational state. The group became a major force in national politics after the 1990 levantimiento indígena, and they were critical in the ousting of President Abdalá Bucaram in 1997, Jamil Mahuad in 2000, and Lucio Gutierrez in 2005, earning them a hard-fought position as political kingmakers in Ecuador’s public arena.

Correa’s 2006 election represented a mixed victory for indigenous groups. While he invoked twentieth-century liberal reformer Eloy Alfaro to advocate for progressive reforms in favor of indigenous communities and the environment, he simultaneously promoted a vast expansion of oil extraction, mining, and hydroelectric dams in community lands and fragile watersheds. When challenged on his environmental record, Correa would often label the indigenous left as “mendigos sentados en un saco de oro” and “la izquierda infantil,” arguing that economic development meant making painful sacrifices they couldn’t understand. Besides perpetuating racist depictions of indigenous people as degraded (mendigos) and childlike (infantíl), he missed the point. Moreno’s handling of the current crisis shows he has, too.

Left-wing politics has moved beyond the false dilemma of the Cold War that only left room for capitalists and socialists. Today’s leaders must understand that the very premise of modern economic development is now under attack, not just its unfair distribution.

Southern Affairs is a Latin American history blog, offering news and analysis of current events, historical essays, and book reviews about the region.

The site is published by N. H. Gill, a historian and journalist from North Carolina. It serves as a working draft for research projects and other lines of flight.