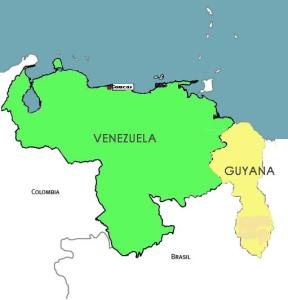 Guyana Foreign Minister Rudolph Insanally announced a temporary truce on Wednesday after Venezuela’s military blew up two Guyanese mining boats on a river near the international border. The attack took place on Nov. 15th and was part of a three day military operation, called Tepuy, to remove illegal miners from the Cuyuni River basin.

Although Venezuela has promised it can provide coordinates that prove the attack took place in their territory, it was agreed to postpone an official declaration until Venezuela’s Foreign Minister Nicolás Maduro returns from a trip to Europe. The delay will also give both nations more time to complete their analysis of the event.

Guyana is also waiting for a response over an unauthorized Venezuelan military incursion in Guyana last year that left one Guyanese citizen dead. Foreign Minister Maduro promised to provide information in this case last March during a press conference at the Rio Summit but so far no report has been released.

The history of the dispute dates back to a contested 1899 treaty that established the current international border between the two countries. Venezuela refuses to accept the legitimacy of this agreement, claiming a 56,000 square mile area of mineral rich territory around the Essequibo River in western Guyana. The claim includes roughly five-eights of Guyana’s national territory and is rich in natural resources like uranium, gold, diamonds, copper, hardwood forests, as well as being home to approximately 160,000 Guyanese citizens.

The event also highlights the difficulty of regional efforts to integrate South America while such border conflicts continue. This dispute is just one of the many ongoing territorial conflicts around the continent that periodically erupt, straining diplomatic relations and alienating citizens to the idea of greater social and political integration.

Examples of this alienation can be seen in other areas such as the current conflict between Argentina and Uruguay over the construction of a pulp and paper plant on a shared river; Colombia’s continued attacks on guerrillas and drug eradication efforts in northern Ecuador; Bolivia and Peru’s (separate) claims to parts of northern Chile’s maritime territory; and border disputes between Argentina and Chile in the Campo de Hielo Sur in southern Patagonia.

While the region remains committed to peaceful arbitration to resolve these disputes, there is no respected authority to enforce compliance of mediated agreements once they are made. A perfect example of this is the failure of Argentina and Uruguay to settle their differences in the Botnia paper-mill dispute. The two countries have so far used a bi-national commission, the International Court of Justice (ICJ), Mercosur, and the King of Spain, yet none of these methods has worked and the border remains closed.

The inefficiency of this ad hoc conflict resolution system means that disputes simmer on the back burner of regional diplomatic relations, causing ministries to waste time and manpower on petty conflicts. While these disputes receive little attention in the international news, they generate harsh feelings in local communities, which in turn limit national politicians’ ability to reach compromises on other strategic regional issues.

Perhaps the most striking example of the damage caused by these long-running disputes is the disagreement between Chile and Bolivia over Bolivia’s access to the ocean. Although nothing substantial has changed in the last 123 years, the issue remains so divisive that Bolivia refuses export any natural gas to Chile where current and projected energy shortages are already fuelling high inflation. Ironically, Chile’s energy crisis coincides with an ongoing economic crisis in Bolivia; leaders there hope to use increased revenues from energy exports to fuel national development. Except for the lingering dispute over the War of the Pacific, both countries could provide indispensable help in solving the other’s problems.

The reality of these conflicts and their importance in local communities are much more potent than diplomatic rhetoric would lead us to believe. Until individual countries are willing to solve these conflicts it is hard to see how South America will achieve its ambitious goals of total regional integration or generate the necessary consensus to advance its regional interests in international forums.

Southern Affairs is a digital history site offering essays, news, and book reviews about Latin America and the environment.